The Gate is a new explore area added in the game. It can be accessed from the top right corner in the regular explore map. The area is accessible only for players Lv.60 and above. It contains five regions, each requiring specific party or other conditions for entry. Each region has a specific boss which only appears in this area. 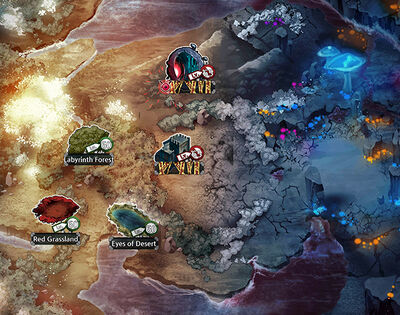 In most of the Gate areas, almost all steps taken in exploration will result in landing a devil encounter, powerful devil encounter, or a boss encounter. There are no recovery areas except for Ruined Temple's chaotic force, which only positively affects rank 7 cards, reducing the HP of any devils below rank 7 in the process. It's best to stock up on FP or revive potions if you are entering a Gate dungeon for the first time.

This is an area where Powerful Rank 6-7 devils and bosses can be encountered. 'Chaotic Force' appears in the Ruined Temple. It deals damage to cards under Rank 7. There are three zones in Ruined Temple, Entrance (Boss: Brigit), Corridor (Boss: Lugh Lamhfhada) and Center (Boss: Anku)

This area is inhabited by powerful Rank 7 devils. There are three zones in Soul Cave, Entrance (Boss: Hemera), Underpass (Boss: Castor and Pollux) and Square (Boss: Astrea). There are no entry conditions for these three zones and can be accessed anytime.

A special fourth zone called "Underground Abyss" will be open only for one hour after the defeat of the "Great Evil Lord" during the everyday scheduled World Boss Raids . Rank 7 boss, Chiron, can be encountered in this zone. Once this zone is open you can see a flashing icon (same as devil's gaze meter) next to the Soul Cave icon on the map. If the Great Evil Lord is not spawned during raids then this area will not open.

Community content is available under CC-BY-SA unless otherwise noted.
Advertisement